Option 1: Personal Contract Purchase (PCP)
Monthly payments can be kept lower by deferring a significant proportion of the amount of credit to the final payment at the end of the agreement. For more product information please call one of our sales team today on 01772 627627. They will be able to talk you through your options, and calculate the Guaranteed Future Value of your caravan or motorhome.

Option: 2 Hire Purchase
Change the deposit and repayment period and the calculator will automatically work out your estimated repayments. The APR offered may vary according to a number of factors including deposit paid, status of the applicant, fees and charges and frequency of payments.

Finance calculations based on £5,000 deposit (new vehicle) or £1,000 (used vehicle), over maximum finance term available. This example does not constitute an offer of credit. Finance is subject to status. Terms and conditions apply. *The actual documentation and/or other fees and charges that may apply may vary from time to time and from lender to lender. We work with a number of carefully selected credit providers who may be able to offer you finance on your purchase. We are only able to offer finance products from these providers. 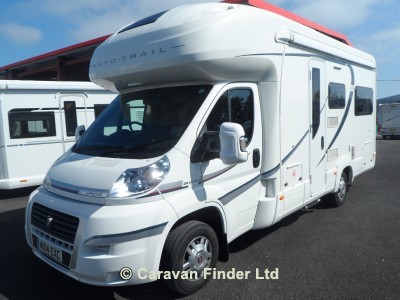 This classic British u-shape rear lounge makes use of a removable table which can be stored in the wardrobe to make a more open space for lounging.The Apache has a large worktop area by the sink, but there is more space on the sideboard by the cooker.By positioning the cooker across the kitchen, Auto-Trail has freed up more work space and there's an extractor roof vent to remove cooking smells.Sleeping arrangements in the Apache provides a neat, flat bed at the rear, even if it is narrower than many competitors. The overcab is pleasingly tall and has one window.The washroom has a separate shower compartment and looks homely. It has several functional touches, such as one permanent towel rail with a second, removable version in the shower.The Apache has bucketloads of exterior storage. It has a dedicated battery locker and a seat-base locker, but best of all it has a huge, rear 'boot'/double-floor storage locker - we estimate that there is just under 400 litres of storage space.

Your enquiry will be processed by Caravan Finder Ltd and sent to this dealer for sole use for the administering your enquiry of this advert.Disclaimer :- Whilst every effort has been made to ensure that the details of this Motorhomes are accurate, please check with the seller that the information is correct and that the Motorhome is still for sale before travelling.

Information contained on this page is proprietary. The owner claims copyright and database rights in the same. All rights reserved. For the avoidance of doubt you must not use or attempt to use any automated program (including, without limitation, any spider or other web crawler) to access our system or this website, or to search, copy, monitor, display or obtain links to any other part of this website. Obtaining access to any part of our system or this website by means of any such automated programs is strictly unauthorised.

We use cookies to ensure that we give you the best experience on our website. If you continue to use this site we will assume that you are happy with it.Ok